Is the first month of the year really over already? In some ways it flew by and in others it dragged a little. I suppose that means it’s time for another In My Kitchen post.  Thanks again to Maureen for hosting this wonderful monthly get together.  As always it has been rather busy in our kitchen. This time around I’m not starting off with new kitchen items or food, but with my two budding sous chefs.

All three boys have always been by my side in the kitchen. They help, they eat while I try to cook….they are a constant in my kitchen. To help them along with their cooking skills I decided to let each of them have their own brunch. They would get to plan it and help cook.

Jack was first. For his meal he picked cauliflower crusted quiche (bacon, cheddar and broccoli) and a fruit crisp with crushed snickerdoodles on top (thanks Celia for the idea). Let’s just say it was pretty popular and Jack did well helping prepare the meal. He also enjoyed bossing his brothers around since he was the head child chef! The lesson on opening a bottle of bubbly was also a hit, especially when the cork hit the light fixture. 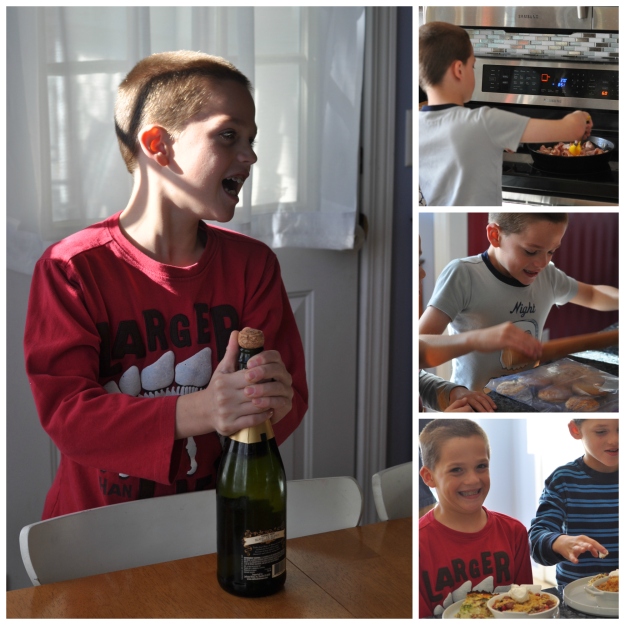 Next it was Ewan’s turn to plan and help cook a brunch.  He waffled back and forth between a grits dish or deviled eggs.  In the end he chose deviled eggs with shrimp, mango and blackberry kabobs and orange cardamon cinnamon rolls.  He also had a great time.  He follows directions much better than Jack!  Sean helped as well and Jack a little too.  Ewan also loved his bubbly lesson! 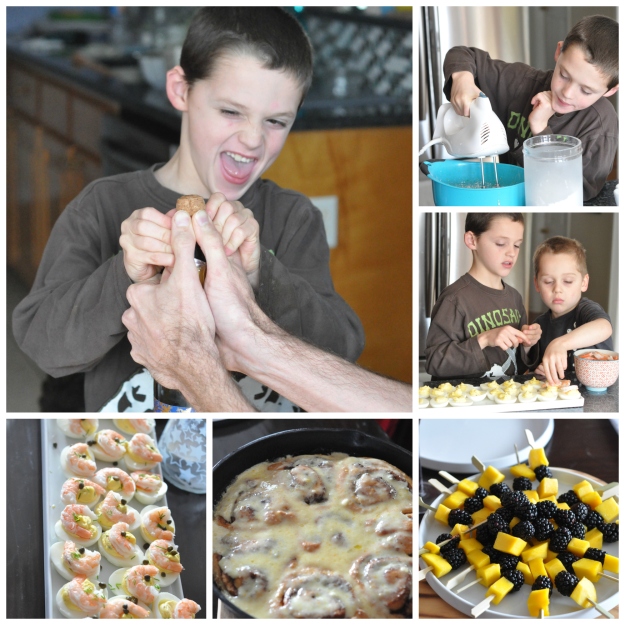 Now onto new items in my kitchen.  First off I have some elderflower syrup from an IKEA trip earlier in the month.  The boys had a long weekend so I decided a trip to IKEA was in order.  We went to the gym first thing in the morning and left after that.   It’s a little less than two hours to get there so we headed to the cafeteria as soon as we arrived, my poor pigs were hungry after all!

Once they had lunch I dropped them off at the play area and was thrilled there was room available.  I managed to do all my shopping, pay and load the car and still have six minutes of time left (you get one hour of childcare).  The elderflower syrup is the reason I went.  Josh tends to consume a lot of St. Germaine because he loves the flavor.  This way he can still get the flavor and it’s cheaper.  Don’t get me wrong, we still drink St. Germaine! 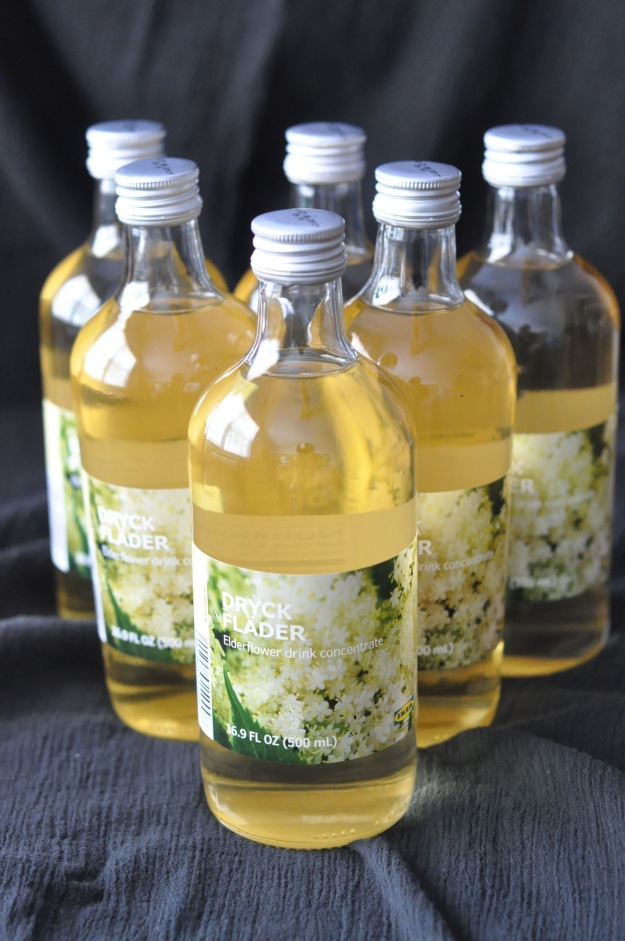 Also this month I have some sprouted spelt flour and amaranth.  I’ve finally started experimenting with my sourdough and am enjoying it.  Right now I’m using half bread flour and half spelt flour.  Then I toss in a hand full of amaranth.  It reminds me of the breads I used to get at bakeries when I lived in Germany and Austria.

This month I also have two new Bee’s Wraps from my Mighty Fix shipment.  These are a substitute for plastic wrap.  Made of cloth and beeswax you can now wrap food naturally with a sustainable product.  If only the large was big enough to fit on my huge bowl of sourdough when proofing….

Finally I have new kids’ tools in the kitchen.  Early in the month I took Jack with me when I was running errands.  He wanted everything at World Market, it was like a kid begging for everything in a candy store!  In a weak moment I finally caved on a couple items, at least I know he will use them.  He liked the section with everything that was mini, he kept saying “it’s so cute, can I have it”!  So he got some silicone pinch bowls, he also picked out a set of ceramic animal measuring cups.  Finally, when Josh was ordering some electronic supplies from China the store he ordered from had EVERYTHING, especially kitchen gadgets.  I let Jack pick out these Bento forks which the kids love.  I may have gotten a few items too, next month you may see them…

It’s been another fun month in my kitchen.  With all these new goodies we’ve been baking and experimenting with spelt.  The experimentation continues next month.  Sean has his turn planning and making brunch this weekend (we’re calling it brunch because he melted down when I tried to call it breakfast…it will be a brunch meal just at breakfast time so Josh has more time in his workshop).  With all their helping in the kitchen the boys just may get their own blog that they’ve been begging to have!  Don’t forget to pop on by Orgasmic Chef to see what is happening in kitchens across the globe.