I’m not exactly sure what took so long to put up a biscuit post.  We certainly eat biscuits a few times a month.  Perhaps it took so long because they disappear very quickly!  There isn’t a spare second to photograph them before the boys have inhaled them.

Here’s a confession, I was raised in the North.  Not exactly biscuit country.  As a result I was raised on the biscuits from a tube.  You know the kind, pop the tube open and voila, you’ve got flaky biscuits. 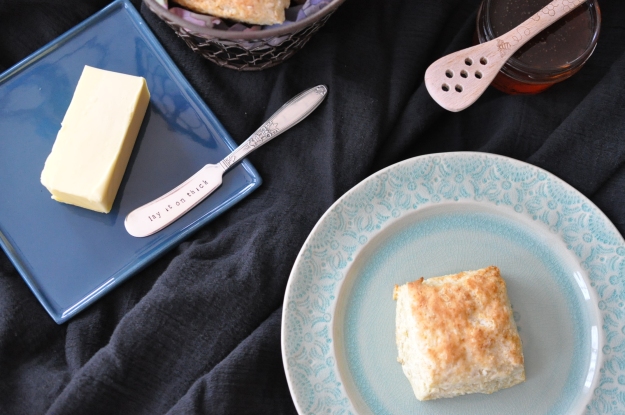 Luckily I moved South and have been blessed to be exposed to real biscuits.  It took some time but I’ve come up with a version I like and we use all the time.  For a while Josh did the biscuit baking since he was raised on homemade biscuits.  The boys will tell you that mine are better!

As for the butter, I’ve tried several ways of preparing it for the dough.  The traditional method is to cut it into cubes.  I’ve also cut it into thin slices and then halved the slices.  Finally there is the method of freezing the butter and grating it.  This is my current favorite method.  By all means, do whatever works best for you.

Lately I’ve been cutting the biscuits into squares instead of circles.  For me this works for a couple reasons.  It’s one less thing to clean up since I’m not using a biscuit cutter.  It also doesn’t require pulling the scraps together to cut again so all the biscuits have the same texture.  The less you handle the dough the better the biscuits.

That being said, the boys still love it when I cut them in circles because I sprinkle cinnamon sugar on the scraps and bake them too {my Grandma used to do this to pie dough scraps}.  They fight over those pieces! 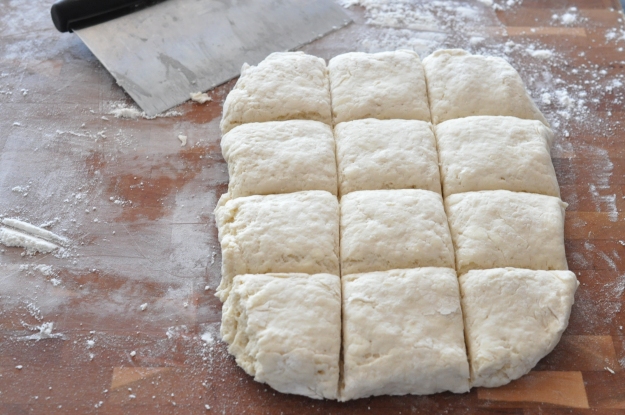 In our house biscuits are extremely popular.  The guys like them swimming in sausage gravy, slathered with butter and drizzled with lots of honey, covered with a thick layer of homemade jam.  They are also good with a sweet or savory compound butter.  Cut them smaller and add some country ham for a brunch.  I could go on and on with all the possibilities. 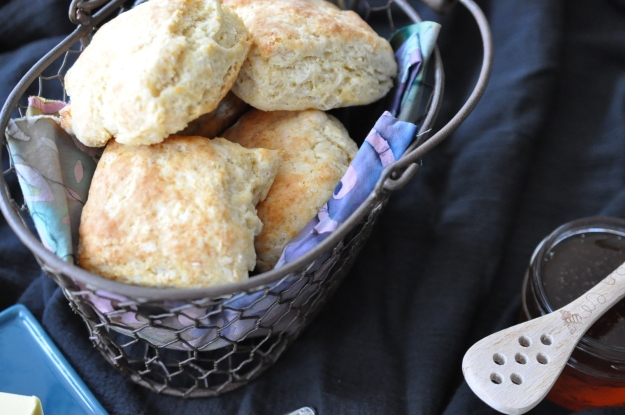 Whisk together the flour, baking powder, salt and baking soda in a large bowl. Add the butter and use your fingers to cut it into the dry ingredients. It should look like little peas when it is well mixed, do not overwork it or your biscuits will be tough.

Pour in the buttermilk and gently stir with a wooden spoon or spatula. Turn the dough onto a floured surface, flour your hands. Pat the dough into a 1/2 inch thick rectangle. Fold it over in half three times, folding the longer side in half {after the first and second fold pat it back down to a 1/2 inch thickness}.   After the third fold pat it down to a 3/4 inch thick rectangle, about 9×6 in size. Use a dough scraper to cut it into 12 biscuits {3×4} and place on the baking sheet leaving space between each biscuit. Bake for 10-12 minutes or until golden brown.

NOTES
* It is important to keep the butter and buttermilk very cold.
* If you don’t have buttermilk {which I rarely do} just add 1 Tbs. vinegar or lemon juice to a measuring cup and add enough milk to measure 1 cup.
* You can add as little as 1 tsp. or as much as 1 Tbs. sugar to the dry ingredients and use it for a strawberry shortcake biscuit.