I have been plotting to make these scones for a long time now. Back in the spring when we planted the garden I jotted down recipe ideas to use all the zucchini. Mother Nature must have been laughing at me because I did not get one single zucchini, let alone to copious amounts I was planning on!

Cinnamon scones are one of my favorites, and of course I can’t get enough zucchini bread. The idea for the zucchini cinnamon scone was born! Combine my favorite spices from the bread and lots of cinnamon from the scones, throw in some zucchini and what could go wrong? Miracle of all miracles, the scones turned out on my first attempt. 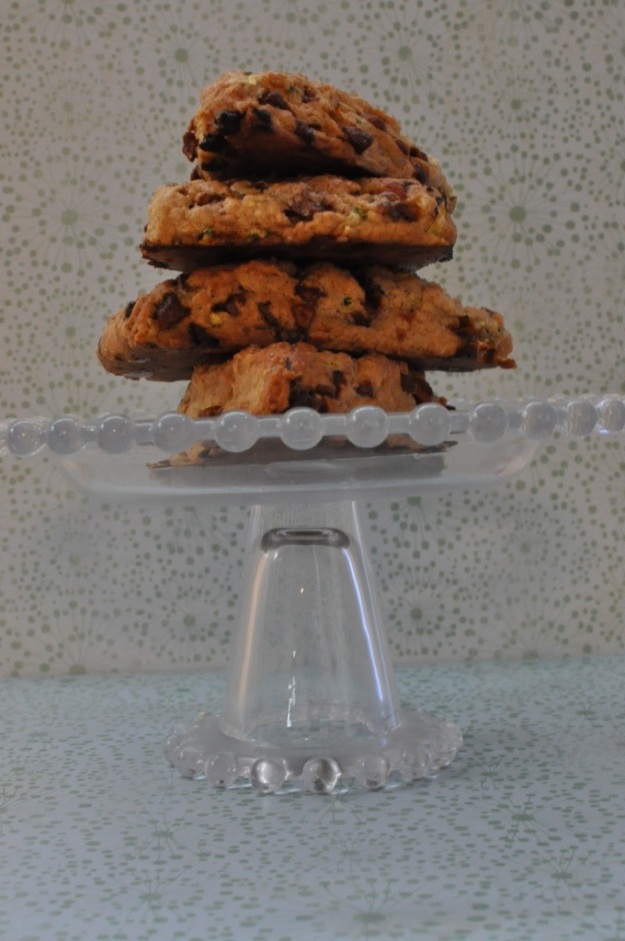 It did take some time to actually see this through. I waited half the summer for zucchini from my own garden. The bugs got all the plants so I FINALLY gave up and decided I would just have to buy zucchini. Plus the cinnamon chips are extremely difficult to find unless it is the Christmas season. I have been looking at every single store I go to. I FINALLY found some a couple weeks ago. Then I just needed to find the time to bake them.

The boys were thrilled to watch me make them since I used the food processor. They love all of my “tools”, as in any small appliance that makes noise! They lucked out last week too since I used nearly all of them, food processor, stick blender, blender…they are waiting on the ice cream machine again! I hope you enjoy these as much as we all did!

Preheat oven to 425 degrees and line a baking sheet with Silpat or parchment paper. In the bowl of a food processor combine the flour, sugar, baking powder, baking soda, salt, cinnamon, nutmeg and ginger. Pulse a couple times to blend it all together.

Place dough on a floured surface and knead several times. Pat dough to a circle about 3/4 inch thick. Cut into 8 wedges. Separate the scones so they do not touch and place on the cookie sheet. Brush tops with cream and sprinkle with raw sugar or cinnamon sugar. Bake for about 20 minutes.